The series first aired on July 20, 2002 and the final episode aired on November 25, 2006. The series spawned three seasons (with 20 episodes per season), it also did a crossover with The Fairly OddParents in a special called the Jimmy Timmy Power Hour which aired on May 7, 2004 during the show's second season. It was so successful that it spawned two sequels: When Nerds Collide and The Jerkinators, which aired on January 16, 2006 and July 21, 2006, respectively. The series was critically acclaimed with viewers and TV critics alike.

The early prototype of Jimmy was "Johnny Quasar: Boy Genius". John A. Davis produced a short film of the character in early 1995 and was pitched at SIGRAPH 1995. However, since the name sounded too much like Jonny Quest, he changed the name to "Jimmy Neutron".

Then, John met Keith Alcorn and Steve Oedekerk and they decided to work together and revamp John's idea for the series.

The pilot, "Runaway Rocketboy!" was produced for Nickelodeon and was supposed to start the series. However, since CGI was becoming popular for movies (as well as the roaring reception for the pilot), they made the movie, and the show was made afterwards. The producers had a mere three weeks to slam together an entire episode once the series was picked up.

Since its premiere date, Jimmy Neutron has become one of the most iconic Nicktoons of all time. To this day, it has remained one of the most popular 2000s Nicktoons along with Danny Phantom, Invader Zim and Avatar: The Last Airbender.

Even though the movie was popular while in theaters and being shown on Nick, many consider the show to be better than the movie. Also, due to the movie playing often on Nickelodeon long after it had left theaters, some people believed that it was released during or after the show.

The series had the most-watched television premiere on Nickelodeon at that time with 4.3 million viewers.

A fourth season was planned, but plans for this season were scrapped after DNA Productions went bankrupt, due to the lackluster performance of The Ant Bully. Cancelling the series was a big loss for the company, so producing the fourth season would have been too costly and Nickelodeon couldn't purchase the company to continue the production. Four scripts were finalized for this season, but two of them have yet to be revealed. Another reason was because the show had been doing well in syndication.

A spin-off series called "Planet Sheen" ran from October 2, 2010 to February 15, 2013 with only one season and 26 episodes. It focused on Sheen getting stranded on another planet after stealing Jimmy’s experimental rocket ship. The series was panned by both critics and audiences. 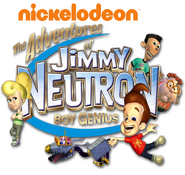