Princess Oom, having his Ultra Lord figures being called "dolls", being told Ultra Lord doesn't exist, the spy song, being told he can't sing, seeing his friends sad, Carl's annoying singing, getting yelled at by Cindy and Nick, evil, the fact that Ultra Lord was cancelled after one season, Ms. Fowl, baseball, Robo-Fiend

Sheen Juarrera Estevez is a major character from the Jimmy Neutron franchise and the main protagonist of Planet Sheen. His birth date is November 16[1].

"Sheen is not the brightest bulb on the Christmas tree, but what he lacks in smarts he more than makes up for with his appetite. Sheen is totally into with the Ultra Lord action hero. He collects all the Ultra Lord action figures and quotes him daily. He's a little obsessive. Did we say "a little"?"

Sheen has tan skin, a triangle-shaped head, and dark brown hair that is usually spiked. He wears a turquoise ringer Ultra Lord t-shirt, black jeans, and a pair of turquoise and white hi-top sneakers. He always wears a pair of red or purple Ultra Lord underwear. In the movie and shorts, the ends of his sleeves and the collar on his neck were darker, almost in a teal color.

Despite being related to the man who invented spray-on eyebrows, Sheen is one of the few characters who do not have eyebrows or a chin. However, in his official 2D design, he does have eyebrows.

In Planet Sheen, Sheen doesn't wear his iconic Ultra Lord t-shirt anymore. Although he did wear his normal outfit throughout the pilot and he did wear it during his dream sequence in Cutting the Ultra-Cord and his flashback in Is This Cute?. Instead, he wears a blue-green and dark blue jumpsuit (with a Zeenu insignia on his right chest), blue pants, blue boots, and a black belt with a silver buckle.

Sheen's eyes usually are brown but in some episodes, there are mistakes. For example, in the second Fairly OddParents crossover special, his eyes turn indigo, and in the next crossover episode, his eyes are black.

Sheen has obsessed with a superhero called "Ultra Lord." He collects all the Ultra Lord action figures, cards, and quotes him daily. Sometimes, Sheen can be somewhat insensitive and miss the big picture of things. Sheen is 13 years old (he got held back a few times as mentioned in "Operation Jet Fusion"). Despite worshiping Ultra Lord, he actually cares about his father and Libby most of all.

Despite Sheen's hyperactivity and peculiarities, Sheen has actually shown to be very helpful, able to provide some scientific insight or come up with a solution, albeit unusual ones. During their time on the Junk man's ship, the boy's brains have scanned, Sheen's brain has shown to be quite larger than Carl's. However, in most cases, whenever Sheen is about to display his aids, he is often inhibited by his low attention span and insane behavior, claiming to have sabotaged his own brain with TV and sugar. In The League of Villains, Sheen has shown to be a compassionate person; he believed there was goodness in Tee and was proven right.

Sheen has also shown to be very prone to seizures, as demonstrated in episodes such as Operation: Rescue Jet Fusion, Crouching Jimmy, Hidden Sheen, and Keeping Up With the Gronzes.

One day, after sneaking into Jimmy's lab and disobeying Jimmy's specific instructions, Sheen touches Jimmy's new rocket and goes flying into deep space. He lands on a strange Dr. Seuss-like planet called Zeenu, where the grand leader thinks that Sheen has destined to bring peace, prosperity, and eternal joy to the planet.

After the Emperor promotes Sheen to be his number one royal advisor, Sheen gets to do virtually whatever he likes, such as battling man-eating creatures and throwing wild parties. On Zeenu, he makes new friends, including Mr. Nesmith is a super-intelligent chimp, Aseefa-- a Glimmorian princess who becomes his new love interest and Doppy-- a slug-like creature who has an uncanny resemblance to Carl. With his new friends' help, Sheen must foil the plots of Dorkus and find a way to get back home before anybody notices he's gone.

Unfortunately, an evil villain named Dorkus is angry that Sheen accidentally destroyed his house in the crash and is out to do away with him. Whenever Dorkus tries to destroy him, Sheen's crazy antics almost always save the day.

At the end of several episodes, Sheen writes a letter to his grandmother in his star log, which sums up everything that happened in the following episode and what he's learned from it. He always ends the messages by saying that he'll be home soon, but surprisingly, he doesn't seem worried about whether he'll get back to Earth or not.

Since the series only lasted one season, Sheen had never shown returning to Earth. However, since his future self has seen in "The Tomorrow Boys," it can be implied that Sheen eventually made it back to Earth. It is also worth noting that the futures were just predictions and not actually real.

There's also speculation that Planet Sheen may be non-canon, but nothing is confirmed so far. A few have even gone as far as to say that the crash on Zeenu gave Sheen brain damage, which would explain why he doesn't remember anything logical he knew back on Earth, not to mention his lack of common sense and all of his serious traits being erased. Some have also said that Zeenu may have different hours, so Sheen could've gone for one minute for all we know. Another fan theory is that this was all part of a dream Sheen had. But that's all pure speculation at this point.

In a Nickelodeon podcast, John A. Davis stated that Sheen worked better as a supporting character, so therefore, giving Sheen his own show was not exactly the best idea. Further to that extent, in another podcast featuring Debi Derryberry, Rob Paulsen, and Jeffrey Garcia, the voice actors stated that a good way to revive the franchise would be starting with Sheen immediately crashing landing back down to Earth, as they preferred the original formula as well.

Sheen has a crush on Libby, and his interest in her became highly noticeable in the middle of the second season. In Crouching Jimmy, Hidden Sheen, Yoo-Yee took advantage of this by taking her captive and ordering Sheen to duel him for her freedom. At the end of the episode, Libby admitted to being his girlfriend, giving him the Eye of the Tiger and the strength to fight back, successfully ensuring Libby's safety. We also learn in that episode that Libby is more important to him than Ultra Lord. When Libby finds out about this, she learns to accept Sheen for who he is. We also learn that she cares about him more than music. It is unknown why he doesn't mention her in Planet Sheen or if they were even still dating at that point.

In Planet Sheen, he has a new love interest: A blue alien named Aseefa, who owns a pet chock tow and loves to save people. Aseefa also seems to return Sheen's affections as well and is very trusting of him. It is unknown whether it's just a crush or Sheen actually has a relationship with her, but it is most likely a crush. For some reason, Sheen never mentions Libby or even brings her up.

Sheen has shown to have a loving relationship with his father. However, in El Magnifico, Mr. Estevez tries to compete with Ultra Lord so that Sheen will look up to him more. At the end of the episode, Sheen admits that he loves his father more than Ultra Lord. Sheen is the only main character without a mother. The creators had stated that his mother died when he was to remember her. However, his mother has mentioned in the movie's PC video game adaptation and When Pants Attack. He has also shown to be close to his grandma, who lives with him and his father. He is also known to have a younger sister, but she had only mentioned in I Dream of Jimmy. Sheen told Jimmy that he had an argument with her about whether or not the potty fairy was real.

In the franchise, Sheen's best friends are; Jimmy, Carl, Cindy, Libby, Nick, Brittany, and Goddard, when he joins them on their fun and amazing adventures because they always lead to something exciting.

In Planet Sheen, he is best friends with Mr. Nesmith, Aseefa and Doppy and he usually helps them with their adventures, while trying to find a way to get back to Earth. Sheen often leads them in strange escapades and often gets them mixed up in some strange conundrum, which only he can solve.

Yoo-Yee is Sheen's arch-nemesis. In Crouching Jimmy, Hidden Sheen, during a dance at Lindbergh Elementary School one night, some ninjas kidnap Libby, the love of Sheen's life on orders of Yoo-Yee himself! Moreover, the reason he commanded Libby's abduction is to lure Sheen into a battle, just because the former wants to replace the latter as the Shangri-Llama Chosen One. Obviously, anyone who messes with Sheen's sweet princess really awakens the wrath of Sheen, much more than those who make fun of Ultra Lord. This is because Libby is more important to Sheen than Ultra Lord.

Dorkus hates Sheen because he destroyed his house (by accident), made fun of his name, and stole his job, so he has plotting to destroy him and get back his position with the Emperor. Luckily, Sheen's wacky antics always stop Dorkus' evil plans. 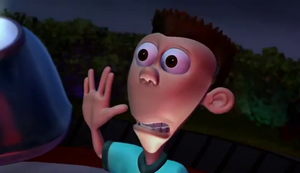 Retrieved from "https://jimmyneutron.fandom.com/wiki/Sheen_Estevez?oldid=83253"
Community content is available under CC-BY-SA unless otherwise noted.