The Quantum Replay 9000 is one of Jimmy's inventions.

In its first appearance in Cookie Time, Jimmy and Goddard sneak into the kitchen to steal the cookie jar. But Judy catches them and tells Jimmy to put a cookie he snatches back of else he'll spoil his dinner. Jimmy asks his mom if he could have just one cookie, and Judy agrees. Jimmy takes the cookie and then eats it, then he uses his Quantum Replay to rewind Judy giving him one cookie so he can repeat himself eating the cookie he steals from the jar. However, while rewinding himself with his Quantum Replay to keep eating the cookie he steals, Goddard snatches it in his mouth and he and Jimmy start tugging on it. They then accidentally send themselves back in time. A T-Rex then sees them and Jimmy asks the dinosaur if he would like a cookie. The T-Rex then roars and starts to chase after Jimmy and Goddard.

In its second appearance in Sorry, Wrong Era, after Jimmy made smoothie go up and out of Cindy and Libby's noses, he used the Quantum Replay 9000 to rewind the smoothie going back into them, as he needed new test suspects for his invention. Jimmy then uses it's fast forward button to make the smoothies go out of their noses again only in fast motion. Jimmy then keeps rewinding and fast forwarding the smoothie coming out of Cindy and Libby's noses, much to their disgust. Hugh then arrives and loves Jimmy's invention and what it does. Hugh asks Jimmy to let him try it out and he agrees. Jimmy gives the Quantum Replay to his dad and then he starts rewinding and fast forwarding the smoothie coming out of Cindy and Libby's noses, giving the two girls brain freeze. Jimmy then uses it to rewind Cindy and Libby all the way back into Cindy's house. Hugh loves the Quantum Replay and figures if he wanted to go back two minutes, he presses the buttons two, zero and zero. Jimmy tries to warn his dad that not how it works, but Hugh then zaps Jimmy, Carl and Sheen with the Quantum Replay and accidentally sends them back in time to the Cretaceous Era (Jimmy explains Hugh didn't set the Quantum Replay for two minutes, but for two hundred million years). After Jimmy, Carl and Sheen disappear, Hugh doesn't see them anymore and presumes they went back to Jimmy's Lab. Hugh then becomes master of time and space. Hugh goes back into the house and sees Judy who just dropped a bunch of berries all over the floor while making a pie. Hugh then uses the Quantum Replay to rewind his wife dropping them all over the floor. Judy asks Hugh where did he get it and he tells her it's one of Jimmy's inventions. Judy then gets disgusted with Hugh and tells him to give Jimmy back his device, but Hugh then rewinds Judy coming into the kitchen. Hugh states having fun with the Quantum Replay is better then pie. Hugh then goes to the Candy Bar where he eats and ice cream cone and rewinds himself eating it. Hugh then keeps on eating and rewinding himself eating the ice cream in front of all the customers (for hours) disgusting them all. Sam then gets furious at Hugh for re-eating his ice cream in front of all the other customers and tells him it's disgusting and kicks Hugh out for it. Hugh suggests to Sam he's right, but before leaving he drinks his Purple Flurp and burps and then rewinds himself drinking it and burping and keeps on rewinding himself doing that, Sam then faints from it. Hugh then signs for parachute school and uses the Quantum Replay to rewind himself jumping and falling out of an airplane with no parachute. The man on the plane tells Hugh when signed up for parachute school, he suggests he uses a parachute. But Hugh tells the man he doesn't need one when he's the master of time and space. Hugh then keeps on jumping and falling out of the plane with no parachute and rewinding himself falling back up into the plane. Later on, Hugh gets brought home by and angry mob (again) and all the townspeople tell Judy everything he's done (one of the things Hugh did with the Quantum Replay was made a pregnant woman experience the miracle of birth over and over again). Judy then takes Hugh into the house and tells everyone to calm down and she'll take it from here. Judy then closes the door and gets disgusted with Hugh and grabs him by his ear and locks him up in a cage for everything he's done to the townspeople. Back in the Cretaceous Era, Jimmy manages to make another Quantum Replay out of stone, using berries as the buttons, a stick for the antenna, and powerful crystals for it's power. Jimmy uses the second Quantum Replay to fast forward a volcano to erupt and uses it to quickly get him, Carl and Sheen back home, a little leptictidium who Carl named Leppy came with them too. Back in the Modern Era, when Jimmy, Carl, Sheen and Leppy make it back, they go into the house and Jimmy fears they altered the time line when he sees Hugh in the cage with Judy holding the Quantum Replay fearing they created a world where human males are slaves to female warriors. Carl and Sheen scream in terror and run outside to Cindy and Libby to surrender to them. Judy tells Jimmy to relax and tells him she put Hugh in the cage to keep him from annoying the townspeople. Judy then rewinds Hugh apologizing over and over with the Quantum Replay. Leppy then takes the Quantum Replay and somehow rewinds the whole episode back to the beginning, making Jimmy say, "Whoa, deja vu.". 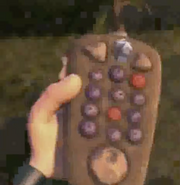 A Quantum Replay Jimmy made from a rock, berries and a stick.

The Quantum Replay as it appears in Cookie Time.
Community content is available under CC-BY-SA unless otherwise noted.
Advertisement