Planet Sheen is the second television series in the Jimmy Neutron franchise. It is also the final Nicktoon to be produced by O Entertainment and one of O Entertainment's final projects in general.

The series was a critical and commercial failure, causing it to be cancelled after one season with a total of twenty-six episodes. Some episodes even premiered a year later in September 2014.

One day, Sheen sneaks into Jimmy's lab, finds Jimmy's new experimental rocket ship and accidentally blasts himself into outer space. Four million and one light years away, Sheen crash-lands on Zeenu -- a strange Dr. Seuss-like planet inhabited by purple and pink aliens called Zeenuians. After using their bathroom, Sheen wants to go home, but his rocketship got smashed in the crash, and it's his only ride. Luckily, Sheen makes some new friends on Zeenu including; Mr. Nesmith-- a super intelligent chimp, Aseefa-- a beautiful Glimmorian warrior girl who becomes Sheen's new love interest and Doppy-- a slug-like creature who looks and acts exactly like Carl.

Unfortunately, an evil villain named Dorkus is super mad that Sheen destroyed his house in the crash and he's now bent on destroying the pesky Earth boy! With the help of his new friends, can Sheen survive the evil plots of Dorkus and repair his rocket so he can get back to Earth before anyone notices he's gone?

The series was originally going to be a show called Red Acres. The concept was to be about a fast food worker who got launched into space, eventually crash landing onto a planet with hillbilly aliens, but Nickelodeon didn't pick it up. The producers then decided to retool it into Carl and Sheen stealing Jimmy's rocket and landing on a strange planet, but executives erased Carl from the series and made it just about Sheen. However, the producers still wanted Carl involved, so Doppy (Carl's alien double) was created.

Jeff Garcia reunites for the series as the voice of Sheen, along with new cast members, Bob Joles, Soleil Moon Fyre, Fred Tatasciore, and Thomas Lennon as the voices of Mr. Nesmith, Aseefa, The Emperor, and Pinter, and ones from the original series, Rob Paulsen, Candi Milo, and Jeff Bennett (the voices of Carl, Nick, and Sydney Moist) as the voices of Doppy, Chock Chock, Princess Oom, Dorkus and Grish. Besides Sheen, none of the other Jimmy Neutron characters appeared. However, Carl had a cameo in Is This Cute? and Ultra Lord made a special guest appearance in Cutting the Ultra-Cord with Jim Cummings respiring his role in that episode.

Originally, the Emperor was going to be evil and the show would've focused on Sheen being a double agent for the Emporer and the Resistance (led by Aseefa). This was dropped because it was too similar James Cameron's movie, Avatar.

Planet Sheen received mixed reviews from critics, one of these critics, Emily Ashby of Common Sense Media gave the series 3 out of 5 stars; saying that, “While there isn't any content that's overtly problematic, there's equally little of any real value to kids.” [7]. Despite this, the series was critically panned by fans. It was criticized by fans for making Sheen (the comic relief) the main focus, as well as not using any of the original cast, lack of character development, lazy attempts at humor and because of Sheen’s serious character derailment. It’s possible that because the show got very low ratings, aired its episodes out of order, it was cancelled after only one season. It is considered one of the worst Nickelodeon shows of all time. However it has regained some sort of popularity as a meme, making it ironically good to some people, thus Planet Sheen has regained something of a cult following.

In a Nickelodeon podcast, John A. Davis admitted that Sheen was only a character who worked in small doses and he regrets working on the show. 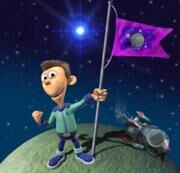 "Jimmy Neutron! Someone is putting these notes in your lab!"

Carl's cameo in Is This Cute? 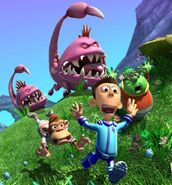