View source
watch 01:36
We're Getting Mutants in the MCU - The Loop
Do you like this video?
Play Sound

Cindy denying her crush on Jimmy, Sheen's nicknames for her, having her music taken away from her, lying, seeing her friends sad, meat (except when she was a werewolf), parties being cancelled or delayed, Sheen's stupidity

"Laid back Libby is Cindy's best friend and the voice of reason in their class. Libby has a mind of her own, but for some reason, it usually seems to echo Cindy's. When Cindy goes too far, though, Libby provides a much-needed reality check. She also has a voice that can shatter glass and send dogs running for cover."

In the movie, shorts, season one, and temporarily in Beach Party Mummy, Libby wore a turquoise dress with blue, green, and orange patterned rectangles on it, turquoise green knee-high socks, and black Mary-Jane shoes with a gold buckle. She also had a streak of her hair covering her right eye along with her hair in a high bun held by a hair tie that matches the pattern on her dress, and her eyelids were red.

In "Beach Party Mummy", Libby is given a new hairstyle, dreadlocks as part of Jimmy's plan to make Libby look like her ancestor, Queen Hasabataslapya and put the mummies to sleep for 10 trillion more years. Libby likes the new hairstyle so much that she decides to keep it. In the next episode, Libby gains new clothes; a striped pink fading shirt, blue jeans, brown shoes, and a pink choker collar.

She wore a purple shirt with white curly designs, white pants, and white shoes in Lady Sings the News and in "Nightmare In Retroville" for her fashion model Halloween costume and while she was a werewolf.

She had seen in her underwear in "Patrick the Snowman." It is two pieces and consists of a similar color scheme to her dress.

In the N Men, as Invisible Sister, she wears a blue bodysuit with matching boots and finger less gloves with a silver lining and a silver belt.

In Crouching Jimmy, Hidden Sheen, she wore a sparkly red shirt, with a purple stripe on the bottom, black flared jeans and white shoes. She also had blue eye shadow, red lipstick, and a beauty mark on her left cheek.

Not much is known about Libby's family, but she is known to have a father and mother. In "Beach Party Mummy," she discovers that she is related to Queen Hasabataslapya, and changes her hairstyle to the one her ancestor wore in her portrait. She is a vegetarian.

Along with Cindy, Libby won the first-place trophy for River stomp dancing at the school contest in "Battle of the Band;" Jimmy, Carl, and Sheen almost beat the girls with their electronic rock music guitars and drums, but at the last minute, Carl and Sheen destroyed their own instruments in a jealous quarrel. The boys ended up with was an eighth-place trophy after Carl did his giant snot bubble trick.

In "Crouching Jimmy, Hidden Sheen", Yoo-Yee kidnaps her so that he can take Sheen's place as the Chosen One in Shangri-Llama. Sheen goes to rescue her and defeats him after Libby admits to being his girlfriend. Libby also realizes that Sheen cares about her more than Ultra Lord. It also revealed that she cares about him more than music.

In "The N-Men", Libby gains the superpower of invisibility, based on how she was putting on vanishing cream when she and the group were exposed to the Van Patten Radiation Belt. Libby calls herself "Invisible Sister". She learned in the military station that she also had the ability to generate a force field and create a pad to float herself in midair.

In The League of Villains, Jimmy, Carl, Sheen, Cindy, and Libby's superpowers are mixed up, thanks to Carl's incompetence. Libby is the one who had ended up with Carl's superpower, Burp Boy. This made her gain the ability to make gigantic burps enough to make anyone go flying.

In the shorts, movie, and early episodes, Libby was more of a flat character, but as the series progressed, she began to stand out from the rest of the gang and evolved into the group's most sensible and levelheaded member.

Libby's main favorite genres of music are hip-hop, R&B, and funk. Two of her science experiments involved music: one was comparing music of the Baroque period to today's music; and plants' responses to musical stimuli (classical R&B vs yodelin' to the Oldies).

When she experiences music withdrawal, she faints and goes crazy. She also loves electronic gadgets and being stylish. In the first and second season, she doesn't appear in the title logo. However, when she becomes more involved in the show, she is added to the logo in the third season. Unlike Jimmy's other friends, Libby is shown to be a great student but is not a genius like Jimmy and Cindy. Libby also is candid and cannot lie at all, which often gives complications to Jimmy's plans or keeping secrets. However, because of this, she is more open about her feelings than Cindy is. Although she does lie in A Beautiful Mine, Jimmy for President and Attack of the Twonkies, which the gang is understandably shocked by.

Libby's favorite band is Graystar, whom she sometimes asks to play at Retroville. She also was revealed to have piano playing skills.

Libby has full knowledge about Jimmy and Cindy's relationship with each other, as Cindy does not want to express her feelings to Libby about it and stammers each time Libby mentions it. Although, Libby sometimes joins Cindy in teasing Jimmy and can be apathetic to their fake fighting. Libby returns Sheen's interest in herself, but not when Sheen is not annoying her with his overbearing mentions of Ultra Lord and occasional flirting. Sometimes, Libby denies that she likes Sheen, even though it hinted that Libby might be a fan of Ultra Lord as well.

In "The Tomorrow Boys", Libby had become the evil dictator of Retroville after Carl accidentally got the Megalomanium to her birthday party out of confusion by the perfume and the Megalomania. When she opened the present, she became mad with power, thus making her the evil dictator of Retroville. When Jimmy, Carl, Sheen, and Goddard saved the future, she got mad at them for destroying her gifts and ruining her party. When Sheen explains everything and apologizes, she forgives him and realizes how much Sheen cares about her.

Cindy Libby are best friends. Libby is always seen with them, whether it's hanging out, having fun or going shopping. They even go to each other's homes for playing.

Libby is smart enough to know that even some of Cindy's own absurd antics can go a little too far, earning a snide remark or a slight hint of disappointment from Libby (making her a bit of a foil), especially since she is well-aware of Cindy and Jimmy's feelings towards each other. Cindy is also aware that Libby likes Sheen.

In the shorts, the movie and season one, Libby was more of a sidekick to Cindy and didn't have much of a role in the franchise, but since then, she's become more of her own person and the gang's voice of reason.

Libby and Sheen weren't quite close friends at the beginning, however, Libby does encourage and compliment Sheen when he comes up with a good idea. For instance, in Beach Party Mummy, when Sheen distracted Principal Willoughby by telling him that new school tanning salon had been opened, Libby smiled and responded to Sheen's idea with "Great thinking Sheen!" The two were even seen dancing alongside each other in the same episode. Libby also always sticks up for Sheen whenever somebody yells at him or mocks him. A good example is at a scene in the Yolkian dungeons in the movie.

Their friendship eventually blossomed into a relationship during the episode of Love Potion 976/J, where Sheen was accidentally exposed to Jimmy's love potion and suddenly fell in love with Libby. After the effects were reversed, Sheen still liked her and Libby showed him that she did like him back. From then on, Sheen has shown interest in her and is always looking after her, but it is hinted in previous episodes that he's always liked her. While Libby doesn't always approve of the nicknames which Sheen makes up, she returns his feelings and thinks he's cute and funny. In Crouching Jimmy, Hidden Sheen, she finally becomes Sheen's girlfriend after defeating Yoo Yee. We also learn that Sheen actually cares about her more than Ultra Lord and that she cares about him more than music. Sometimes though, Libby denies liking Sheen out of embarrassment.

In Planet Sheen, Sheen gets a new love interest and his and Libby's relationship is abandoned because of it. It is unknown if they were still together at that point, or if Planet Sheen is even canon.

Libby acts somewhat sisterly to Jimmy and is always trying to get him to come out of his shell. Jimmy likes Libby because she's calm, mellow and sensible.

In Crouching Jimmy, Hidden Sheen, Yoo-Yee thought Libby was Sheen's girlfriend, so he tried to kidnap her to urge Sheen coming to Shangri-Llama and fight him. He tried to be nice to Libby and even gave his sister's room to Libby, but she didn't like it because her CD collection was totally beat and hated the wallpaper. However, Libby did like Yoo-Yee's sister's jewelry. She was also angry at Yoo Yee for senselessly beating up Sheen, which gave Sheen the proper motivation and made him defeat Yoo Yee. 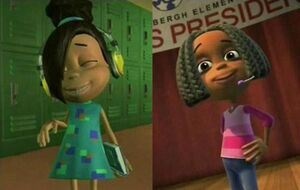 Comparing music of the Baroque period to today's music

Yodeling To The Oldies for Two Hours Daily

It Never Had A Chance

Listening to Multicultured boys with no attitude