Jimmy Timmy Power Hour is a crossover special between The Fairly OddParents! and the Jimmy Neutron franchise. This special has spun two sequels. The trilogy's canoncity is up for debate, as there is no further mention of Jimmy or his universe in subsequent episodes of The Fairly OddParents.

Timmy hasn't done his science project, so he wishes he was in the greatest laboratory in Dimmsdale and thus ends up in A.J.'s lab. Knowing that he can't use A.J's stuff, due to A.J. finding out, he uses the Auto-Poofer given to him by Cosmo and Wanda to back to his own room. He wishes he was in the greatest lab in the universe. Timmy (now in CGI) arrives in Retroville in Jimmy's lab. Jimmy can be seen currently is updating Goddard when Timmy drops in and starts to mess with his inventions. Jimmy accidentally uses Timmy's Auto-Poofer, causing him to disappear to Dimmsdale. Seeing Goddard, Timmy mistakes him for a game console, where Timmy puts in a video game he was carrying which causes Goddard to become more like the violent Decimator game.

Just then, Carl and Sheen drop by and mistake Timmy for Jimmy due to Sheen believing Jimmy has shrunk his own head. The two then start to play with Jimmy's unguarded inventions. Judy arrives and thinks Timmy is Jimmy and grounds him when Timmy talks back to her. Timmy then uses Jimmy's hypnotizing device to make her think that she is Mighty Mom. After playing with some of the experiments and stealing a rocket-powered skateboard, Timmy rockets himself across town, and bumps into Cindy who falls in love with Timmy, believing him to be more handsome and smarter than Jimmy.

Back in Dimmsdale, Jimmy (now in 2-D), finds himself in Timmy's room and meets Cosmo and Wanda, who (for their sake) he believes to be holographic computer fairies. However, Timmy's Dad, Vicky, and several kids in Timmy's school stupidly believe Jimmy to be Timmy using a costume to make up for not doing his science project. Jimmy inadvertently uses the Auto-Poofer in front of Mr. Crocker who realizes that he has found a way to get into Fairy World. Jimmy ends up back in Timmy's room and after finding it only teleports him there, combines it with Timmy's handheld video game so he can teleport anywhere. After following Jimmy to Timmy's home, Mr. Crocker steals Jimmy's device before he can use it, and teleports himself, Jimmy, Cosmo and Wanda to Fairy World.

Back in Retroville, Timmy and Cindy enjoy hanging out with each other at the Candy Bar, but Goddard appears, now taking on the form of the Decimator. After Timmy blows it off at first, Libby, Carl and Sheen try to stop the giant robot from destroying the town, but fail. Meanwhile, Timmy and Cindy are on a date trying out all of Jimmy's inventions. Timmy asks Cindy if she'd still like him if he wasn't a genius, but Cindy answers no. Carl, Sheen, and Libby run to Timmy and warn them that Goddard is after them, but Timmy STILL doesn't care and thinks it's not a big deal. Goddard arrives and shoots the kids with flames, though they remain unharmed, just black with soot. Timmy realizes what he has done. He tries to get home to Cosmo and Wanda for help. But before he can escape, he is eaten by the Decimator. Goddard targets the Purple Flurp factory and decides to destroy it. Libby tells everyone if he destroys it he'll cause a major flurp spill, which could dissolve all of Retroville (with the acid and corrosive sugar in the Flurp). Libby calls Cindy and Timmy to warn them. Realizing they have no time to get to the core, Cindy figures out that if Timmy disconnects the game's drive, the game will shut down and Goddard will deactivate. However, the laser pen runs out of power, so Timmy uses his teeth to bite through the lock protecting the lever to deactivate the game. With time running out for Timmy, just as Goddard is about to destroy the town with his rockets, with Cindy's help, manages to shut down Goddard, and restore him to normal. Cindy arrives in Jimmy's hover-craft. Fortunately for Timmy, Cindy stupidly believes that Timmy created the evil Goddard so that she could solve the entire incident, and she kisses him, much to the other's disgust. With Goddard back to normal, Jimmy makes contact with his friends and informs Timmy that Crocker is in Fairy World.

In Fairy World, Jimmy comes in contact with Timmy, who is alarmed to find out that Mr. Crocker is in Fairy World. Jimmy does not listen to Timmy's plan to get Crocker out of Fairy World and refuses to help him after the trouble Timmy caused. Crocker then discovers that if he steals magical equipment and knocked down the Big Wand (which powers the fairies' magic); the fairies would surrender to him. Crocker steals a suit of magical equipment and knocks down the Big Wand, leaving all of the fairies, including Cosmo, Wanda and Jorgen von Strangle powerless. Thinking the fairies to be unreal, Jimmy gets ready to leave after stealing the Auto-Poofer from Crocker. After talking with Timmy, who convinces Jimmy that Cosmo and Wanda are as real to Timmy as Goddard is to him, Jimmy makes his Brain Blast and has a plan to stop Crocker. Returning to the school, Jimmy combines the science fair experiments into a robot which Cosmo and Wanda use to distract Crocker, while Jimmy repairs the Big Wand so that the fairies' magic works again and Crocker would be defeated. Jimmy, using Jorgen's wand, makes Crocker's suit vulnerable to magic and turns Crocker into various scientific equipment, before making him powerless again. Crocker is attacked by Jorgen, who makes Crocker lose all memory of Fairy World. With the fairies' magic restored, Timmy wishes that Jimmy and he could get back into their own hometowns. The two shake hands in the limbo between both of their worlds, which causes Timmy to be back in 2-D and Jimmy to be back in CGI. Cindy shouts that she'll never forget him, while Jimmy tells her to leave his lab.

Back in Dimmsdale, Principal Waxelplax reveals that she would be judging the science fair instead of Crocker, who she claims has lost his memory "in a bizarre schnauzer incident", causing Crocker to go insane upon hearing the word "schnauzer". Cosmo and Wanda note what a good day they've had, before Timmy reminds them that he still hasn't finished his science project. Out of a wormhole appears Goddard (now in a 2-D/CGI form), who amazes everybody. It is shown that Jimmy managed to figure out how the Auto-Poofer worked, and sent Goddard to Timmy's world. Timmy wins the science fair and thanks Jimmy. Cindy appears in the lab one more time to ask Jimmy to tell him she said hi, but instead Jimmy yells her to leave again.

On the DVD, there are three bonus episodes from both The Fairly OddParents! and Jimmy Neutron. 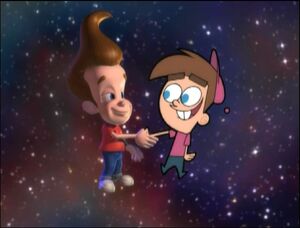 Retrieved from "https://jimmyneutron.fandom.com/wiki/Jimmy_Timmy_Power_Hour?oldid=69319"
Community content is available under CC-BY-SA unless otherwise noted.