Being short, being made fun of, being bullied, humiliation, embarrassment by his peers, his inventions inadvertently failing, people not listening to him, nobody believing him, admitting when he's wrong, seeing his friends sad, being told he can't draw or write, Brobot's annoying ways, danger, the League of Villains

Nicktoons MLB (in a video game)

James Isaac "Jimmy" Neutron is a 10-year-old genius and the titular main protagonist of the Jimmy Neutron franchise.

"Retroville's resident boy genius knows a lot about science, but not so much about life. He thinks anything can be solved with a mathematical equation or a new invention, built his own robot dog, Goddard, and uses his best friend Carl as a guinea pig for his experiments. Genius aside, Jimmy is your typical kid: He takes his parents for granted (until he needs them), enjoys hanging out with his pals Carl and Sheen, and is in constant competition (or is it infatuation?) with Cindy Vortex, the smartest girl in Retroville. Oh, and not counting his gravity-defying hairdo, Jimmy's the shortest kid in class and has to be in bed by nine."

Jimmy is a 10-year-old boy genius. He has fair skin, a disproportionately large forehead, blue eyes, and brown hair in a swirly cowlick. He is often teased because he is shorter than most boys of his age, though sometimes he appears to be the same height as his friends. Jimmy's wardrobe consists almost exclusively of red T-shirts that sport his trademark symbol of a yellow atom.

In the shorts and the films, he wore purple-blue shorts and brown loafers, but for the series proper, he switched to denim blue jeans and a pair of grey and white Converse-style sneakers. His undergarments consist of red-orange plaid boxers and grey boxer briefs in the movie. He also wears his light-blue lab coat with the same neutron symbol on the back (and sometimes his welding mask) during his course of lab work. In the pilot, he wore a red and white striped shirt instead of his trademark red one. A picture of him in this outfit can be seen several times in the show. When he goes to sleep, he wears a gray pajama shirt and red velvet pajama pants.

Jimmy is a very intelligent kid, having an impossible I.Q. of 210. In many episodes, his classmates are angered because he is so smart and keeps outdoing them in anything math and science-related. This brain, a source of constant comment, allows him to invent devices that accomplish even the impossible. This usually leads Jimmy causing accidental trouble to Retroville. He designs his wild inventions to help him deal with bothersome chores, but they often end up causing a bigger problem. They do put him in exciting adventures though, and make life more interesting.

In the moment of crisis, he will urge his brain by saying, "Think, think, think!", after which the camera enters inside Jimmy's ear (which humorously contains a signboard stating 'EARWAX MUSEUM' in the movie) and goes into his brain to observe its inner workings as well, as to relive a scene from the early part of the episode. Jimmy will then shout, "Brain Blast!", and arrive at the solution for whatever danger he has landed himself, his friends, or his town in. In the third season, however, he seems to stop Brain Blasting and comes up with ideas right away, with "Fundemonium" being the only episode that season to use the "Brain Blast!" sequence.

Jimmy is a very nice guy, although sometimes he can be a bit arrogant and a know-it-all. Jimmy has shown to be quite irritable around most people, mainly his friends, and thinking he's above it all. Sometimes, Jimmy can be unsympathetic to other people's feelings and can come off as a smart-alec or a nerd. Jimmy has a little bit of pride despite the fact that his inventions usually go wrong and/or cause trouble. Regardless, he enjoys being a hero, often taking a staunch stand against anyone he believes to be evil. He won't back down from his beliefs, and he strongly believes in himself.

Jimmy is quite charming when he least tries to be, such as at the party, that he throws at his parents' absence in the episode "Party at Neutron's". Despite his pride and arrogance, he cares deeply for his friends and his family and does everything he can to help them.

However, he does have a few weaknesses; one of them is his poor communication skills. It takes him hours to explain things the scientific way, and people find his explanations hard to understand and would ask for a shorter and more understandable version of his story instead. Cindy calls him silver-tongued (in a sarcastic way) in the episode "Love Potion 976/J" as he finds it hard to express his feelings.

Jimmy also tends not to take responsibility for his actions, learn from his mistakes, or even admit when he's wrong. Usually, when his friends (particularly Cindy) try to warn him about the consequences of his actions or plans, he doesn't listen and does what he wants instead, out of pride or because he thinks people are trying to pity him. Jimmy also is shown to be lazy, as he often puts off his chores for other things.

It is also worth noting that in the movie, the shorts and the pilot, Jimmy had a much different personality, likely due to his younger age. He was more childlike, shy, mischievous, naïve and clumsy-- which often got him in trouble not only with his parents but his home town on occasion. In the film, it has also shown that Jimmy had suffered from self-esteem issues (which had only carried over in "Normal Boy"), beating himself up for making mistakes and wallowing in sadness. However, he was able to fight this after Cindy helped him and the others escape from the Yolkian jail. After the film, he became more proud of himself, and rarely ever had any timidity or childlike qualities.

Jimmy's best friends are the llama-obsessed Carl Wheezer and the Ultra Lord-obsessed Sheen Estevez. They may not be as smart as Jimmy, but they are very loyal to him. They are willing to help Jimmy as much as possible (for example, being his test subjects). Usually, these two unlikely-heroes play the foils to Jimmy's genius and sometimes solve the episode's crisis with some innocent or insane observation. Other times, they merely cause the problem. They accompany him in his wild adventures and end up in trouble, but they just keep coming back to Jimmy for more. That shows how much they trust Jimmy.

Goddard may just be one of Jimmy's crazy inventions, but he's a real dog to him. He is Jimmy's lab partner, his favorite invention, and his best friend. Goddard is always there to help Jimmy when he's in a jam and is always loyal.

Throughout the series, Cindy and Jimmy always fight like cats and dogs and consider themselves as rivals. But eventually, they grow fond of each other, leading to a love/hate relationship. It is hard to say who really motivates the relationship, but from what we can see, it is Cindy who gives it a little push, and Jimmy is quick to respond to these hints of affection.

Cindy often calls Jimmy out on his actions and tries to warn him about the consequences of his plans and inventions, but he doesn't listen and does what he wants instead. It has also shown that Cindy doesn't like it when Jimmy is heartbroken or sad, and she always tries to comfort him. Jimmy also still sees Cindy as a friend because she's the one person who keeps encouraging him and keeping him on his feet. Their relationship develops further in Season 3, and in the penultimate episode "Lady Sings the News," Jimmy finally kisses Cindy.

Jimmy likes Libby because she's calm, mellow, and sensible. Libby also serves as a big sister to Jimmy and often tries to encourage him to do something when they are in a serious predicament and tries to get him to come out of his shell.

Even though they don't hang out as much as they did in the movie and season one, Nick serves as a big brother figure towards Jimmy and gives him advice often, but Jimmy usually ends up in trouble because of it. Even though Nick teases Jimmy and makes wisecracks at him sometimes, the two get along well and are pretty good friends.

Jimmy has a crush on Betty and tries to impress her with his inventions. Unfortunately, Jimmy's inventions backfire and as usual, and he has to fix his mistakes. Jimmy and Betty are best friends and continuously flirt with each other, much to Cindy's envy and sadness. It is hinted that Betty might have some interest in Jimmy but knows that he belongs with Cindy instead and is fully supportive of it, but it's hard to show it because Cindy is always mean to her.

Jimmy lives with his parents, and his mechanical pet dog, Goddard. Being the only child, he is very close to his family. Unfortunately, he is considered the black sheep on Hugh's side of the family, due to all the trouble he's caused. The only other relative who likes him besides his parents is his Cousin Gomer.

His duck-and-pie-loving father, Hugh, sports a standard daddy image, disciplining his son using reverse-psychology. He gives his son “advice” whenever Jimmy needs them (he readily pops from almost anywhere, usually from outside the window, to guide Jimmy). He is always there to make Jimmy feel better. Jimmy still loves his dad, even though he sometimes feels ashamed for him being clumsy and “uncool.” He also gets frustrated that Hugh messes with his inventions and causes trouble because of it.

His mother, Judy, is very loving and caring. She is just akin to other moms who want their sons to do the chores first before playing (or in Jimmy's case, before doing crazy stuff in the lab). She is famous for shouting her son's full name, first before scolding him. It seems that she hates it when anyone gets into trouble because of her son's unusually-high IQ and once wished that he is just a normal boy and not a genius (in the episode "Normal Boy"). She takes good care of the house and her family. It is obvious that Jimmy's intelligent genes came from Judy (though it seems that he is smarter than her in terms of science wits).

Jimmy's inventions include his pet mechanical canine, Goddard with many functions, a time machine, and Nanobots. He has several gums and candy-based inventions, which includes: the Neutronic Air Gum, which allows humans to breathe underwater, gum that allows one to memorize books, and candy that satisfies all the tongue's taste buds. After eating such candy, humans develop a physiological need (addiction) for it.

He also made inventions to help him with transportation, the most frequently employed being his flying rocket and his hovercraft. He also has a game pyramid, which allows players to actually go inside their favorite video game, following with a Cloning Machine. In the video games, he makes several inventions, similar to the series. He often creates different types of advanced spaceships with buses and bikes, can use amusement rides to create some, and finishes with his favorite, the hover-car, which he uses most frequently. He creates these inventions in an extensive lab located under his clubhouse, which remains accessible to him alone using a DNA scan.

His latest invention is a rocket ship made just for one as shown in the pilot for Planet Sheen, which Sheen steals and crash lands on another planet. 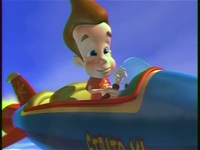 Image Featured: Jimmy in his rocket