Hubert Beaumont "Hugh" Neutron is a major character in the Jimmy Neutron franchise.

"It's clear that Jimmy didn't inherit his genius from his dad, Hugh. Hugh is kind of goofy (ok , really goofy), but he's always in a good mood. When it comes to discipline, he's clueless, and leaves the hardcore parenting stuff to Jimmy's mom, Judy (who he affectionately calls Sugar Booger). Hugh collects wooden ducks as a hobby, but he's almost as fascinated by Jimmy's neato toys as Jimmy is. Strangely, he was president of the Brain Teaser Club in high school."

Hugh is a tall man who wears glasses. He has brown hair as well as brown eyes. He wears a blue sweater vest with a red tie over a white shirt, navy blue pants, and brown loafers with gold buckles.

In the pilot and shorts, he wears a blue suit jacket instead of a sweater vest. He has an unusually shaped nose, which most Neutrons have (except for Jimmy and Baby Eddie).

Hugh's personality seems to be on the quirky side of things and is the sort of person who prefers to do things his way. Despite his odd quirks and absent-mindedness, he is fatherly, caring, well-meaning, and good natured. He loves ducks and pie.

Sometimes, Hugh causes the show's problem when he messes with Jimmy's inventions. Hugh seems dim-witted, but is actually very clever and competent (which Jimmy has obviously inherited). He loves to clean and polish his models of ducks and sometimes will even talk to them. He calls his wife by the pet name "Sugar Booger". Hugh may have taken gymnastics at one point, as he uses this to evade Poultra in "The Eggpire Strikes Back." In the movie, he was fairly intelligent, but for the rest of the franchise, he's became the typical bumbling dad. 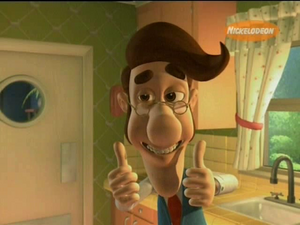 Retrieved from "https://jimmyneutron.fandom.com/wiki/Hugh_Neutron?oldid=52969"
Community content is available under CC-BY-SA unless otherwise noted.