"Jimmy's robot dog, Goddard, is like a hi-tech, barking, Swiss army knife. He can transform into all sorts of useful tools and gets his puppy-like energy from the wall outlet, into which he's plugged to recharge. Did we mention he's a portable phone booth, too? Or that he can simulate Jimmy's voice? Well he is...and he can! He may be the ultimate in cybernetics, but like any dog, he can't resist chasing cats, begging for treats, or burying a really fine chrome bone."

Goddard's able to speak in Jimmy's voice, presumably through recordings. He gets along with Carl, Sheen, and Nick as they are Jimmy's best friends. He seems to dislike Humphrey because they're both dogs, which gives a natural sense of rivalry. And Goddard has little to no interaction with Cindy, Libby, and Brittany.

In the Jimmy Timmy Power Hour crossover special, Timmy Turner stupidly mistook him for a dog-shaped video game, and then he put in a disc for a violent game while he was in the upgrading mode. Then this leads to Goddard being a rampaging monster who terrorized Retroville. Fortunately, by the end of the special, he was returned to normal.

Then Goddard went with Jimmy, Carl, Sheen, Cindy, Libby, and Bolbi up into space in Win, Lose and Kaboom!, when they were forced by Meldar Prime to play Intergalactic Showdown. During the second event, Jimmy orders Goddard to use his grabber claw to grab one of the mushrooms, but the little beast grabs his grabber claw with its tongue, and then it tosses him around causing Goddard to get dizzy. When it's time to vote one of their own off the team, he votes for Cindy. During the fourth event, Goddard was about to run with Jimmy and the others across the obstacle course versing the Brains, when Meldar, says, "Uh uh uh, no cheating!" and then he traps Goddard in a force field bubble before he could run, causing Jimmy and his friends to run across the obstacle course by themselves. Later Meldar gave Goddard back to Jimmy after the event.

Goddard is Jimmy's loyal mechanical canine that Jimmy constructed himself. He's always there for Jimmy when he needs him the most, and he is genuinely Jimmy's favorite invention.

Goddard's mostly silver. He has a plasma globe cranium, filled with ionized noble gases in the form of plasma. He has a mechanical tongue and a yellow snout. Goddard has two ears, which are made of metal. He also has a small pointy tail.

Goddard has a seemingly unlimited supply of gadgets built into himself to the point where there's almost nothing he can't do. At any given time, he seems to be mostly hollow. For example, when he uses the arm that can extend out of his back, his back opens up and reveals an empty compartment, except for the arm. Goddard has some means of holding far more matter within himself than his size would suggest hinted often. Some preliminary material for the film depicts a step ladder simply extending out of Goddard, despite being many times longer. Also, Goddard has been shown firing rubber balls from his mouth, far more than he should generally be able to hold. However, when he self-destructs or plays dead, none of his parts fly out of the explosion that would be expected. Goddard's storage capabilities are likely based on or the inspiration of Jimmy's Hyper-Cube.

At one point, it's stated that the only things Goddard can't do are the doggy paddle because he would rust, and clean up after himself, as Hugh stated. However, in Sea Minus, Jimmy has somehow submerged his family's home on the ocean's bottom. When his father opens the door (ignoring Jimmy's warnings) and lets the water in, Goddard utilizes two jet propellers from his back to shoot through the water.

Goddard's known to have a tape dispenser in his mouth, self-destruct and self-reconstruction capabilities, a scooter mode, a "flight-cycle" mode, a helicopter mode (in which his ears spin as rotors), voice projecting and recording abilities, a fire extinguisher, laser eye beams, the ability to transmit what he sees to Jimmy's computer, the ability to retract his head and tail (then stick them out again in the other's place to turn around quickly), a radar, a winch, and many other gadgets. He also can mimic a real dog in numerous ways, particularly by having an excretion system, though nuts and bolts instead of actual feces. When he drank a burping soda, Goddard was able to burp.

Throughout the franchise, Goddard has been temporarily dog-napped several times. 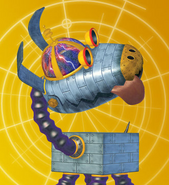 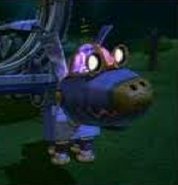 In the Neutron house after excreting lugnuts 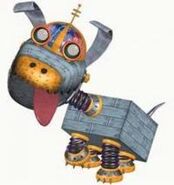 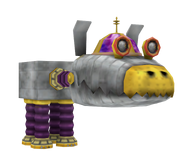 Goddard as he appears in Nicktoons Unite! 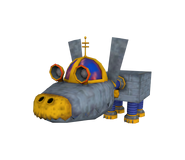 Goddard as he appears in the Jimmy Neutron video games

Goddard with a red nose 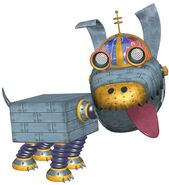 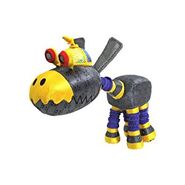 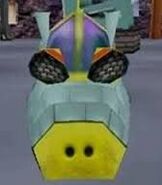 Goddard as he appears in the Jimmy Neutron: Boy Genius Video Game

Goddard flips a switch on the Neutronic Monster Maker

Goddard is captured by Meldar Prime!