View source
watch 01:36
We're Getting Mutants in the MCU - The Loop
Do you like this video?
Play Sound

The Adventures of Jimmy Neutron: Boy Genius
Planet Sheen (cameo in a flashback)

Llamas, Judy (after being sprayed with the love potion), messing with Hugh, eating food, Elke.

Is This Cute? (cameo)

Carl Wheezer is a bespectacled dim-witted boy and one of Jimmy's best friends. Carl and his parents have numerous allergies, at times even to things that are incapable of triggering allergic reactions. He passionately loves llamas, and his passion for them is often used as a running gag throughout the series. He is also a bit cowardly and developed a crush on Jimmy's mom, as shown throughout a multitude of episodes. His crush on Judy becomes so extreme that he is shown an interest in exterminating Judy's husband and Jimmy's dad, Hugh Neutron. An extraterrestrial character named Doppy, with similarities to Carl, is a main character in Planet Sheen.

His extreme obsession for the llama originated when his parents expanded their cable lineup and he became devoted to a show called Llama Boy The Super Hero. Since his obsession began he has gone to great lengths to express his love for them, going as far as to join a fan club called The Llama Love Society, which he likely created himself.

It is worth noting, Carl is afraid of lima beans, germs, and scary stories. He is also known to have asthma, and is very stressed about his multitude of allergies and is terrified of getting any sort of illness. Also, when he is tired, his mom makes him warm milk, rubs his tummy, and sings "nani nani nani".

He frequently shows off his vocal abilities performing improvised and poetically expressed rhymes.

"Carl is Jimmy's best friend, but they couldn't be less alike. Carl is cautious and, well, kind of chicken, and he's prone to wheezing and carsickness. He demonstrates his asthma inhaler for show and tells, and at the amusement park, Carl spends his day trying to beat the guy who guesses allergies. But through it all, Carl is Jimmy's loyal buddy and biggest fan...and the crash-test dummy for Jimmy's arsenal of inventions."

Carl has peach skin with freckles. His large, almost pear-shaped head characterizes him with small black eyes that are reasonably close together. He has short, thick red hair that forms clump-like structures of varying sizes at the top of his head and the eyebrows of the same color/texture.

His body and face show that he is overweight, as they are round and don't reveal much about skeletal structure, though his arms and legs don't seem to have stored so much fat. He wears large brown circular glasses and has a short round, yet broad nose. He wears a light orange and coral short-sleeved vertically striped shirt, under a pair of orange suspenders, which connect to his dark green trousers. He also wears a pair of what appears to be light brown loafers.

In the series, Carl‘s suspenders on his pants are nowhere to be seen, unlike the movie.

Carl is quite greedy, loving to devour not only food but objects such as toys and newspapers. When his parents expanded their cable line-up, Carl found himself focusing on a channel devoted to llamas and a show about a superhero called Llama Boy, the Super Hero. He has adored llamas ever since, going so far as to join a fan club, the Llama Love Society (which he likely created, since he has shown to be the only member). He even turned into a llama once. He is allergic to almost everything and has asthma. Carl often unknowingly gives Jimmy his brilliant ideas.

It has revealed in "The Incredible Shrinking Town" that he took ventriloquist lessons and can virtually imitate and sound like everyone, a feat nobody else in Retroville can achieve. It is also a hint that he has some sort of dislike for Sheen, even though he's one of his best friends. Carl enjoys playing a video game called Llamapalooza. It is also revealed in I Dream of Jimmy and Carl Wheezer, Boy Genius that Carl is actually self-conscious and insecure about his unintelligent, and envious of Jimmy and wants to steal his life. Carl seems to specifically envy Jimmy's IQ and all the attention he gets from girls and is always upset that Jimmy makes him test his inventions since he has sometimes harmed. 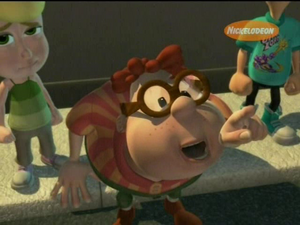